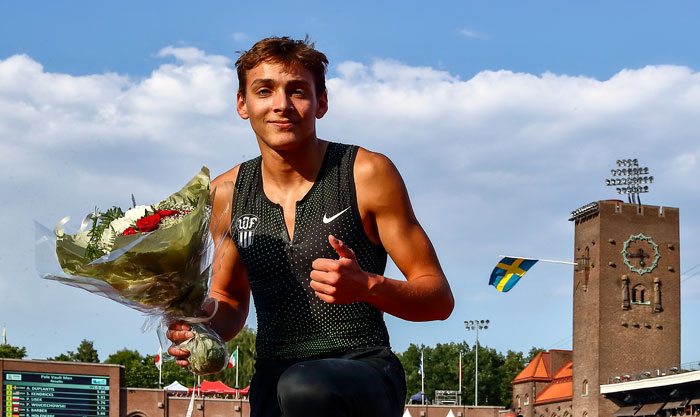 Events in the 14 Diamond League meetings rotate from year to year and now that next year’s programme has been presented we can see that, in the main, the best ’Swedish’ events will feature at BAUHAUS-galan. So, for example, there’s a good chance we’ll be able to see Armand ”Mondo” Duplantis (pic) in the pole vault and Daniel Ståhl in the discus at Stockholm Olympic Stadium on Thursday 30 May 2019. Photo: Peter Holgersson

BAUHAUS-galan 2018 was a great success with four stadium records and a fantastic long jump with Cuba’s Juan Miguel Echevarría, who jumped a massive 8.83m – just 12 cm from the world record. Admittedly this was achieved in a tail wind of over 2.0 m/s but the fact is that only five men have ever jumped further, legal wind or not. And the long jump is once again on next summer’s programme, an event where Sweden’s Thobias Nilsson Montler rose to prominence this year, finishing 4th at the European Championships with a personal best of 8.10m.
– We are pleased with the event programme we’ve been allocated and it gives us a good basis to create a competition next year with the best Swedish athletes. We also have the possibility of adding events to include even more Swedes, explained assistant meeting director, Johan Engberg.

Will we see Mondo again?
One athlete who really ignited the 10,000 crowd at last summer’s BAUHAUS-galan was 18 year-old Mondo Duplantis who, whilst competing against an elite pole vault field, managed to claim his first Diamond League victory. A fantastic season followed, crowned with European gold in Berlin when he set three (!) new world junior records and his performance of 6.05m ranks him joint second-best on the world’s all-time outdoor list.

A Swedish middle-distance record?
Another event on the programme which plays to Swedish strengths is the women’s 800m – Lovisa Lindh’s specialist distance. And the legendary Dickson Cup will be awarded for the men’s 1500m, the distance where Kalle Berglund twice this year narrowly missed breaking the Swedish record of 3:36.49.
There are certainly plenty of reasons to believe BAUHAUS-galan 2019 will be a special competition once again!