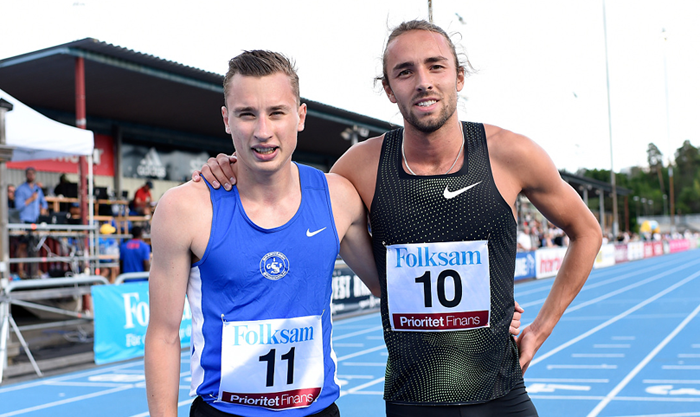 BAUHAUS-galan provides a unique opportunity for Swedish athletes to compete against the best in the world and produce quality results. This applies not least to middle distance runners, which currently include an array of Swedish talent, ready to run fast this summer. Amongst these are Kalle Berglund, Andreas Kramer, Lovisa Lindh and Hanna Hermansson.

It is tough for an 800m or 1500m runner to become established among the international elite. To get a place in one of the top meetings, an athlete must have produced good results. But to run a fast time, requires good pacemaking which is best in the highest quality races, which are difficult to get a place in without a good result. An eternal vicious circle, in other words.

The toughest and most attractive meetings in the world are part of the Diamond League, which includes BAUHAUS-galan. The best athletes in the world battle to get a chance to compete in the Diamond League, since these elite meetings provide a good opportunity to produce a good result, a personal best performance or maybe a national record. In addition, the Diamond League offers an opportunity to win prize money. 10,000 US dollars for a win. Not especially much, compared with what stars in many other sports can rake in, but a small fortune for a track and field athlete.

Africa dominates
In last year’s 13 Diamond League meetings – with the exception of BAUHAUS-galan – a total of only five start places were granted to Swedish middle distance runners. Middle distance races are normally dominated by African runners; few Europeans are considered to be good enough. Organisers compete internally for who stages the best meeting, and therefore strive to assemble the strongest possible start fields.
An 800m race at a Diamond League meeting normally has 8-9 runners plus a pacemaker, a 1500m race will have 12-14 runners plus one or two pacemakers. When the best runners in the world are queuing up to participant, it is obviously difficult for Swedish talent to get a look-in.

Once a year, however, places are reserved for the best Swedish runners, and that is at BAUHAUS-galan. On 30 May, around half a dozen Swedish middle distance runners will have the opportunity to face tough competition and achieve qualifying standards for this autumn’s World Championships, maybe even to qualify for next year’s Olympics. Amongst them, last year’s European 800m silver medallist, Andreas Kramer stands out. Kalle Berglund, who improved his own Swedish 1500m indoor record to 3:36.63 last winter is aiming for a big result in BAUHAUS-galan’s 1500m. 2016 European 800m bronze medallist, Lovisa Lindh and last year’s 7th placed European 1500m finalist, Hanna Hermansson, will both compete in the 800m at Stockholm Olympic Stadium on 30 May.

Buy your tickets for BAUHAUS-galan, Thursday 30 May today!