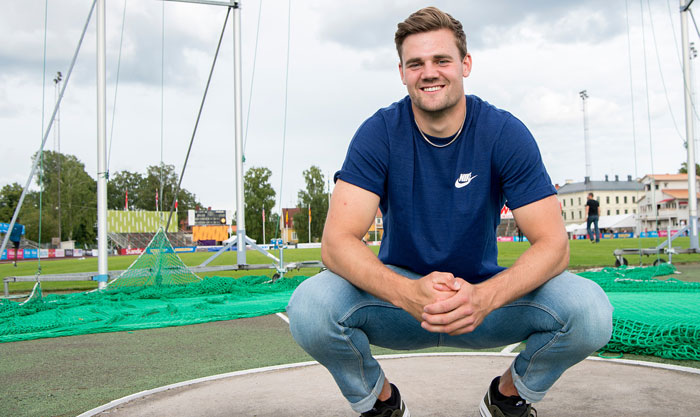 Last summer he made it to the final in his first World Championships and this year he has improved his personal best to 65.81m. Now discus thrower, Simon Pettersson is ready to make his Diamond League debut at BAUHAUS-galan on 10 June. He’ll face the top three from the World Championships final in London, including silver medallist and training partner, Daniel Ståhl. Photo: Deca Text&Bild

– It’s going to be great, it’s an extremely strong field and really inspiring to compete against the best, said Simon Pettersson, 24, who comes from the small village of Sixarby, north of Stockholm.

He is a combined events athlete who switched to discus as a 19 year-old and, with the help of coach, Vésteinn Hafsteinsson, has reached the world’s elite. In March, Simon threw 65.81m, which ranks 9th in the world this year and in April he beat, for the first time, his considerably more famous training partner, Daniel Ståhl.

It was a high quality discus competition at BAUHAUS-galan last year, with four men over 67 metres and this year looks to be even better since all of the top three from the World Championships in London are there - Andrius Gudzius, from Lithuania, Daniel Ståhl, Sweden and American, Mason Finley. In addition, is last year’s winner Fedrick Dacres, Jamaica and three-time World Champion, Robert Harting – then, of course, Simon Pettersson.

– My best memory from Stockholm Olympic Stadium is from the Sweden v Finland match last year when Daniel, Axel Härstedt and I took maximum points. Then also when I was just 12 or 13 and thought it was an incredibly large arena, Simon said, laughing.

Simon belongs to the same training group as the two-year older Daniel Ståhl and they have competed many times. According to the statistics website, Tilastopaja, the score is 34-1 in Daniel’s favour but Simon has the most recent win from a competition in USA a month ago.

– I threw almost a metre longer and to beat such a quality thrower as Daniel is special. The first time we met was at the Swedish Championships in Borås 2013 when Daniel came second and I was sixth. They will meet once more at BAUHAUS-galan on Sunday 10 June.