Echevarría is ready for BAUHAUS-galan after his 8,83 last year 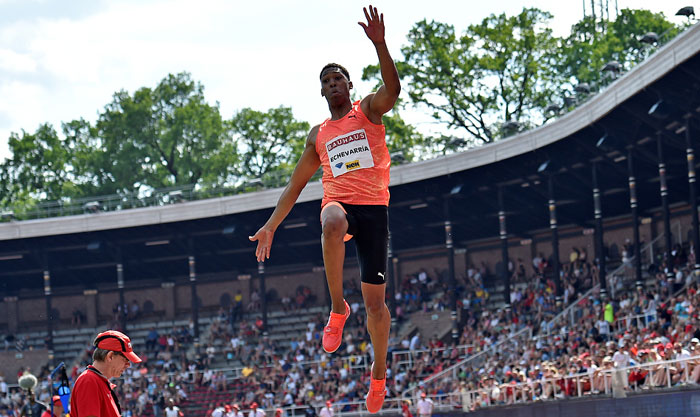 Four stadium records were set at last year’s BAUHAUS-galan but the leading performance was Juan Miguel Echevarría’s fantastic 8.83m in the long jump, which was only twelve centimetres from the 27 year-old world record. On 30 May, he is back at Stockholm Olympic Stadium where the line-up also includes reigning Olympic, World and European Champions plus Sweden’s indoor European silver medallist, Thobias Montler. Photo: Deca Text&Bild

Echevarría’s performance last year was one of the greatest achievements ever at Stockholm Olympic Stadium. He almost jumped out of the pit, then came a tense wait while the distance was measured, followed by shouts of joy at the result – 8.83m. The wind gauge showed +2.1 m/s – just 0.1 over the limit for a legal jump.

– It was a memorable day! The jump came in the sixth and final round so I was quite tired but I remember that I hit the board well and my take off was really good. It will be such fun to compete at BAUHAUS-galan again. The crowd certainly inspire you to great results! Says Echevarría.

After BAUHAUS-galan he continued unbeaten for the rest of the year and topped the world’s statistics with 8.68m in legal wind. This gave him first place in Track&Field News world ranking. In 2019 he has continued to progress and at home in Havana in March he jumped 8.92m, this time however with a 3.3m/s tail wind. At BAUHAUS-galan, Echevarría, Olympic Champion Jeff Henderson, World Champion Luvo Manyonga and European Champion Miltiádis Tentóglou will provide the best possible opposition.

European indoor silver medallist, Montler, ready to face the best
Home star Thobias Montler will also join the field and has developed into a consistent eight metre jumper over the past year. He set personal bests in both the European final in Berlin (4th in 8.10m) and at the European Indoor Championships in Glasgow two months ago where he secured silver with 8.17m.
/Jonas Hedman

See Echevarría’s fantastic 8.83m jump from 2018 which has more than 1 million views