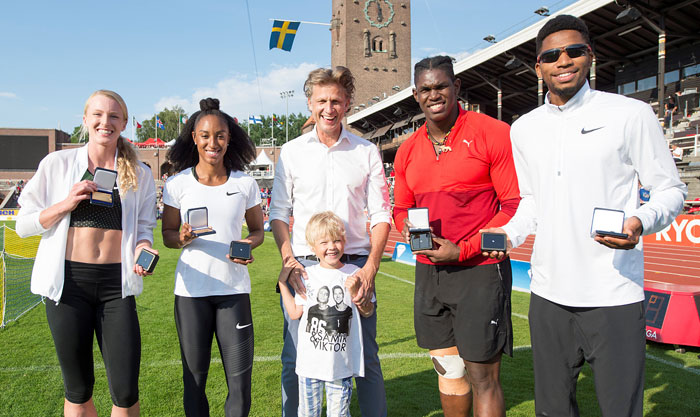 BAUHAUS-galan 2018 was one of the best for a number of years with no less than four stadium records, all rewarded with diamonds. And not far off two more in the almost perfect conditions – 27 degrees and a little cloud. Photo: Deca Text&Bild

The new stadium records came in the women’s pole vault from Sandi Morris who jumped 4.86m, men’s 400m hurdles with Abderrahmane Samba’s 47.41, the women’s 100m hurdles, thanks to Brianna McNeal’s 12.38 and in men’s discus where Fredrick Dacres threw 69.67m.

Indoor world champion, Sandi Morris, cleared her first three heights in the first attempt and then after three tries claimed a new stadium record with 4.86m. Morris then went for 4.94 but without success. The previous record holder was Yelena Isinbayeva who jumped 4.85m.

– I’m really happy with my performance today. The aim was to set a stadium record and I really wanted to achieve a world’s best at 4.94 but I couldn’t get the final stage right, said Sandi who has won all four Diamond League pole vault events this year.

Norwegian Karsten Warholm in lane seven went out hard and led into the home straight. By then Abderrahman Samba had almost caught up and they went over the eighth hurdle together. Samba then managed to inch ahead and reached the finish in 47.41 – 0.24 better than Bershawn Jackson’s eight year old stadium record.

– I was after something big today and I got it. The conditions were not the best, with the head wind in the back straight which made us press too hard but it went well anyway and it was fantastic to set a Diamond League record again, said Samba who also set a new Asian record.

Warholm stuck with him all the way and was rewarded with 47.81 – a new Nordic record by one hundredth of a second. The previous record he set himself in Rome, 11 days ago.

Who would have thought that 66.16 would only be enough for 6th place? After last year’s brilliant competition with Fedrick Dacres and Daniel Ståhl as first and second over 68 metres, this year’s was even better. And Dacres won again after, in the second round, throwing the 2 kg discus all of 69.67m. In doing so he broke Mac Wilkins 38 year old stadium record by 23 centimetres.

– It really felt good today. I felt strong. The crowd was inspiring and I love the atmosphere here. It was great to be back and win for the second year in a row, said Dacres.

Sweden’s Daniel Ståhl’s result was good, with 66.16m and was only 4 cm from fourth place. But his series included only two valid throws and three went into the case. Simon Pettersson, Sweden’s young second best thrower, was the big surprise who managed 65.49 in the fourth round, just 32 cm off his personal best.

USA’s Olympic champion, Brianna McNeal had a flawless race and won by a tenth of a second in 12.38 – the fourth stadium record on this wonderful Sunday afternoon of athletics. In second place was Danielle Williams, Jamaica with 12.48.

– I felt the other girls pressure from behind but felt strong at the end. I know that when everything goes right then the time will be good. I’m so grateful for the chance to be here with these girls and such an engaged public, said McNeal.

It was a fast 400m race in the warm conditions and strongest at the finish was Bahrain’s Salwa Eid Naser who won with .20 in 49.84 – a another personal best for the day – and only .14 from Alyson Felix’s eleven year-old stadium record. Second place Phyllis Francis reached the finish in a season’s best of 50.07 and third was Jessica Beard.

– It was a good result and I’m happy to have set a personal best so soon after Oslo. I was totally exhausted in the heat.

… and 1500m after an incredibly fast opening

In the women’s 1500m the pacemaker opened with a lightning-fast first lap of 59.96 and only Gudaf Tsegay went with her. Laura Muir was catching up on the last lap,  but Tsegay held on and won by one second in 3:57.64. This was a meeting record and less than half a second from Mary Deckers stadium record of 3:57.15 set in 1983.

– I am happy I ran so well. I felt strong and it was special to run with such a quality field, said Tsegay.

In the 200m world champion Ramil Guliyev won in a world-class time of 19.92, just 15 hundredths of a second from Michael Johnson's stadium record. Aaron Brown of Canada was second in 20.07 and Sweden's Henrik Larsson was close to the Swedish junior record with his 20.85.