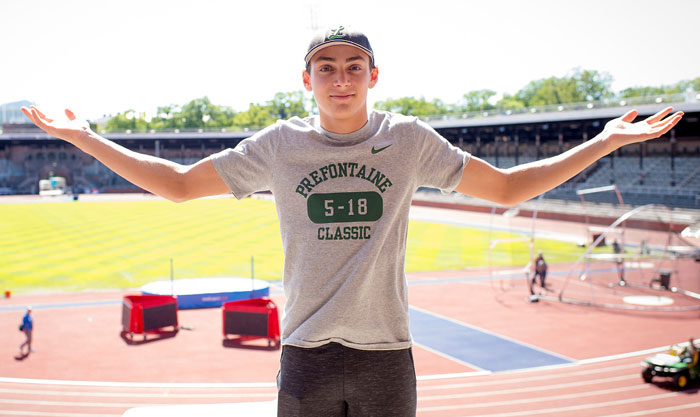 On Friday afternoon, world number two and junior record holder in the pole vault, Armand ”Mondo” Duplantis, landed at Stockholm’s Arlanda airport after a long journey from his home in Layfayette, Louisiana. He came direct to Stockholm Olympic Stadium where he surprised many by holding part of the press conference in Swedish. Photo: Deca Text&Bild

The Swedish-American 18-year-old from Lafayette has this year broken his own world junior record of 5.90m and jumped both 5.92m and 5.93m. The latter placed him second on the world’s list.–

Training has gone well this spring, I’m in good shape and believe that I can jump high on Sunday. I know that the stadium record is 5.95m and if the weather is good and every thing goes according to plan I think I can do it. It would be great to win on Sunday, said Mondo.

A week ago he finished second in the Diamond League meeting in Eugene, Oregon and beat all the world’s elite apart from world champion, Sam Kendricks. Mondo will meet him again on Sunday and has a chance for revenge.

Spoke Swedish at the press conference
Mondo is born and grew up in the American South and has a Swedish mother and American father. Mum, Helena, a strength and fitness coach, tries to speak Swedish with him as much as possible but not quite as much as she’d like.

– I bought a Swedish book called ”Rivstart” (flying start), but he hasn’t used it much.
However, Mondo surprised every one  by speaking Swedish for the first time at the press conference.

– Mondo is best in the family at pole vault but not at Swedish, said Helena, laughing.
There is a lot of pole vaulting in the Duplantis family. Dad, Greg competed at elite level in the 1990s, big brother, Andreas, represented Sweden at several junior championships and younger sister, Johanna, also competes.
Armand and Johanna are going to spend a large part of the summer with their grandparents in Sweden but first Mondo will face the world’s best pole vaulters at Stockholm Stadium on Sunday.