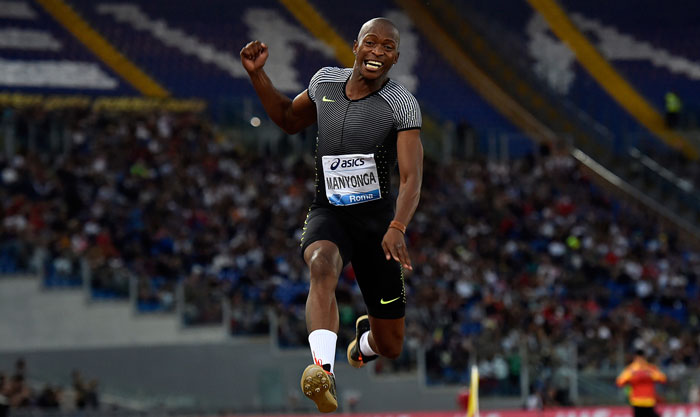 South African long jumper, Luvo Manyonga, was one of athletics biggest sensations in 2017 when he jumped over 8.60m early in the season and then went on to win the world championship title. On 10 June he will be at Stockholm Olympic Stadium to compete at BAUHAUS-galan. Photo: Deca Text&Bild

In 2017 Luvo Manyonga was ranked number one in the long jump and as the fourth best male athlete in the world overall.  He recorded the top 7 results and won all three Diamond League competitions he took part in, including BAUHAUS-galan where he jumped 8.36. Now he’s back to defend his victory.

He opened his 2018 outdoor season in the best possible way, winning at the Diamond League meeting in Shanghai with 8.56 and it’s quite possible that he will break the 21-year-old stadium record on 10 June. This is 8.59 and held by the nine-times world champion, Iván Pedroso.

The long jump is one of the best events at BAUHAUS-galan, which is quite a claim, since the whole competition is packed with Olympic and World champions. All three medallists from the London world championships will be there – Manyonga, second-placed Jarrion Lawson from USA and Ruswahl Samaai, South Africa, who was third.

Added to that is reigning Olympic champion, Jeff Henderson and indoor world champion from Birmingham last winter, Cuban, Juan Miguel Echevarria. Unfortunately, Sweden’s number one, Michel Tornéus, has had to withdrawn with an injury and must postpone his season’s debut.
It promises to be interesting and exciting entertainment around the long jump pit along the back straight of the Olympic Stadium on 10 June.