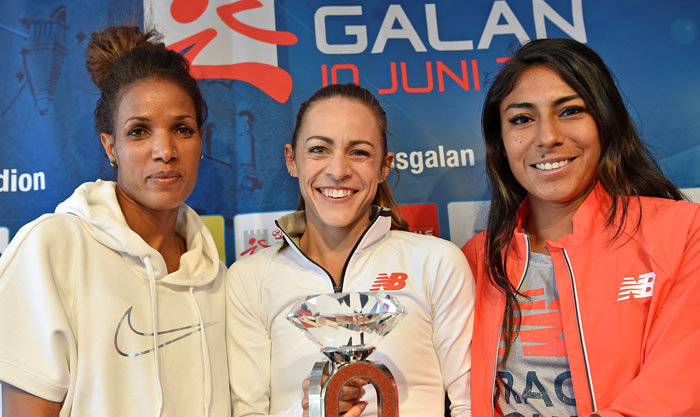 The Women’s 1500m, which closes tomorrow’s Bauhaus Galan, is set to be one of the highlight’s of the afternoon with a stacked field including both Jenny Simspon, the former world champion, and Brenda Martinez from the USA along with Briton’s Laura Muir, the double medallist from the IAAF World Indoor Championships; Ethiopia’s Besu Sado; and Moroccan Rababe Arafi. Photo: Deca Text&Bild

Local favourite and winner of the 3000m here last year, Meref Bahta is also using the shorter distance as training for her 5000m challenge at the European Championships in Berlin later this summer.

Looking ahead to the race Olympic bronze medallist, second in the World Championships in London, USA’s Jenny Simpson, said “I love coming to Stockholm. My reason for this being one of my favourite meetings is that I came here as a college student and won.  Last time I raced here I also won so I am hoping Stockholm will be good to me again.”

She agreed that the quality of the line up tomorrow is very high and added, “The field is loaded but I do hope to finish in the top three.  After Doha and the Prefontaine I am looking to be competitive so I hope it will be fast.”

Brenda Martinez, who was sixth in the 800m in Oslo’s Bislett Games last week, said “It really is a great field with all of us within two to three seconds of each other’s PBs.  I am looking forward to a very fast race.  After my 4:02 in Eugene I am looking to improve on that.”

Meraf Bahta, the 2014 European Champion in 5000m, is looking forward to performing in front of her home crowd, “With the European Championships to aim for I am using tomorrow as speed training as I work hard for my longer, 5000m race in Berlin.”

With no major championships for the American athletes in 2018 they were asked about their priorities this year.  Simpson said, “It is so great to have the opportunity to run fast without the pressure of qualification for a championships.  The Diamond League becomes the key for us.”

Martinez agreed adding, “Without the pressure of team selection – which in USA can be cut-throat – we can relax and post some fast times in the off-year.”

The Scandinavian trio of Norway’s 400m hurdles star, Karsten Warholm along with Sweden’s Lovisa Lindh and Andreas Kramer, are all feeling confident of using home support to their advantage tomorrow.

Warholm, the World Champion from London 2017, said, “I was very happy with my personal best and Nordic record in Rome as a season opener.  My target for the season was sub 48 so it was good to get that in my first race.  Obviously I was disappointed not to win and, gain, in Oslo, but I have things to work on for tomorrow.

“I have to credit my coach – Leif Olva Alnes who has been brilliant with me.  We have fun but we train hard.  I love coming here to Stockholm ever since I came here as a youth.  I always give my all which is why I may end up on the floor at the end!”

Asked about the rivalry with Qatar’s Abderrahman Samba, who is currently in scintillating form with four consecutive sub-48 races, Warholm said, “I like to win but I know he is running faster and I have to chase him and do the best I can.  Currently he is running perfectly so I know I need to improve. For me I like the outside lane so the turns are softer.”

Sweden’s Lovisa Lindh, the European bronze medallist, who made her 800m season debut in Oslo last week, said “I started steady last week after returning from injury.  I am taking things one race at a time and will decide after tomorrow my next race.  I was looking for the qualifying time for the European Champs which I got in Oslo so this gives me extra motivation now.”

Andreas Kramer takes part in the loaded 1000m race tomorrow with Briton’s Jake Wightman, Poland’s Adam Kszczot and Kenya’s Kipyegon Bett all expected to be in contention.  He said, “My race in Hengelo was good but not a perfect run.  It was a good season opener and I think I can do better so I am looking for a good 1k tomorrow.  With two months to go to berlin it is too early to think about that but it is my target. I hope to do a PB tomorrow – even with the extra 200m!”