”Mondo” Duplantis – the greatest talent to have worn a Swedish vest 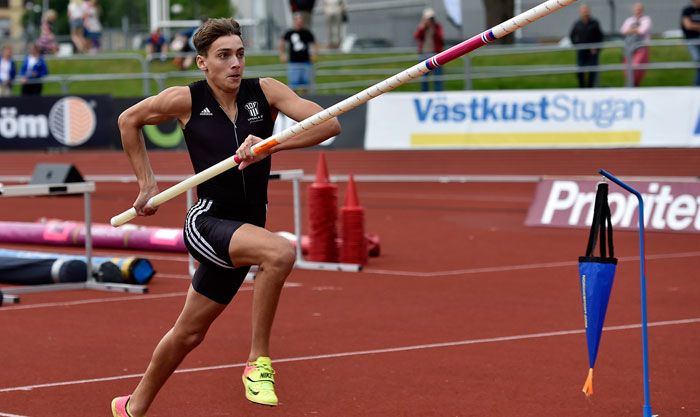 The pole vault at BAUHAUS-galan at Stockholm Olympic Stadium on 10 June is an event not to be missed. Armand ”Mondo” Duplantis will face the world’s elite in front of a home crowd and it could well be that we see the first Swedish six metre jump. He has, in fact, already tested the dream height. Photo: Deca Text&Bild

Mondo is only eighteen but he has already taken his place among the world’s best. Last year he improved his junior world record and the Swedish senior record to 5.90m – a result which put him in 4th place on the world statistics list.

2018 has started even better with a junior world record indoors 5.88m followed by 5.92 and 5.93 outdoors in April. The first outdoor competition was at Texas Relays in Austin in April where he met strong opposition from world record holder, Renaud Lavillenie and 2015 world champion, Shawn Barber. After all three had cleared 5.92m – Mondo at the last attempt – the trio tried for 6.02m, which no one managed to clear. But to have tested that height is important mentally and maybe we will see the first six metre jump by a Swede at BAUHAUS-galan on 10 June.

Quick 100 metres
Just over a month later, Mondo jumped even higher when, at the High School State finals in his home state Louisiana, he cleared 5.93m despite non-existent opposition. The winning margin was 1.5 metres but there was no six metre attempt because the 100m awaited. This time the race didn’t produce a good result but earlier in the spring Mondo recorded 10.57 in conditions just slightly over the legal wind speed (+2.1 m/s), which would have been enough for 11th place in the Swedish senior statistics last year.

One of the greatest
Sweden has produced many athletics talents over the years and Mondo is, without doubt, one of the greatest. Who can actually measure up to his results as an 18-19 year-old? Patrik Sjöberg cleared 2.33 in the high jump as an 18 year-old in 1983 and followed up with an Olympic silver medal in Los Angeles a year later. Caroline Klüft won European heptathlon gold as a 19 year-old in Munich in 2002 then took gold in the World Championships the following year. Another athlete worth mentioning is 400m hurdler, Ann-Louise Skoglund, who set three unofficial junior world records with a best of 56.58 as an 18 year-old in 1980. Two years later she won a European title in Athens. Mondo is now in his last year as a junior and has every possibility of improving even more.

A real athletics family
He was born and grew up in Lafayette, Louisiana, and family members are mum, Helena from Avesta, Sweden; American dad, Greg; and three siblings. Helena was a leading heptathlete in Sweden in the 1980s while Greg was one of USA’s best pole vaulters of the 90s with a personal best of 5.80 in 1993.
The oldest brother, Andreas, has competed for Sweden in the pole vault in four international junior/youth championships and has a personal best of 5.42 indoors. Next oldest is Antoine who is one of USA’s most promising baseball players. Last but not least is younger sister, Johanna, 16, who last spring set a personal best in the pole vault of 3.58. Add to that Mondo’s maternal grandfather, Lars-Åke Hedlund, who was one of Sweden’s best in the 1950s and you can understand that Mondo has pole vaulting in his genes!

Second visit to the Olympic Stadium
When Mondo comes to Stockholm and BAUHAUS-galan, it will be his second competition at the Olympic Stadium. Or rather his third, since as a 15 year-old he won the youth Sweden v Finland match and the following day came third, as the best Swede, in the senior match.
Who knows whether Mondo will achieve the dream height of six metres on 10 June. One thing is certain – you had better be in the stands at Stockholm Stadium!

By your tickets to BAUHAUS-galan at Stockholm Olympic Stadium!