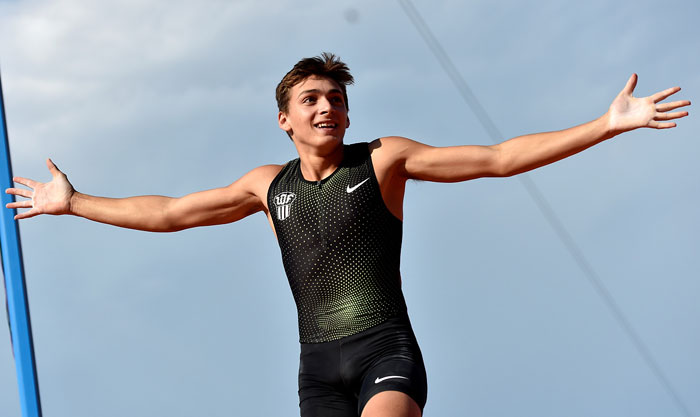 Swede, Armand ”Mondo” Duplantis, 18, set alight the home BAUHAUS-galan crowd when he beat many of the world’s elite and, for the first time, claimed victory over world number one and world champion, Sam Kendricks in today’s pole vault competition. He won by clearing 5.86 with his first attempt with Kendricks failing at both 5.86 and 5.91. Photo: Deca Text&Bild

After Mondo’s recent performances the spectators were eagerly awaiting today’s competition and Mondo certainly did not disappoint.  Under almost perfect conditions with 27 degrees and a little cloud, he cleared 5.50m and 5.66 with room to spare and led the event throughout with Kendricks having failed his first attempt at 5.66m. At 5.76, they swapped places – Kendricks cleared first time and Mondo second – then both sailed over 5.86m on the first try. After that they were the only the two vaulters left and when the Swede cleared 5.86, the Stadium erupted.

Kendricks failed once, passed on his two remaining attempts to 5.91 which got the better of him and with that Sweden claimed their seventh Diamond League event winner, with Christian Olsson (triple jump), Linus Thörnblad (high jump), Emma Green (high jump), Kim Amb (javelin), Abeba Aregawi (1500 m) and Daniel Ståhl (discus) the previous winners.

– It was a magical competition and I’m so happy I managed to beat Sam! Physically, I felt great, I got the rhythm right and I have self-belief. It was wonderful to win and get all that support from the crowd, said Mondo.

I’m now convinced that I can really compete for a world championships title.

Mondo was really close to 5.91m and finished by twice attempting the stadium record and world’s best height of 5.96m.  USA’s Sam Kendricks finished second in 5.81m and Piotr Lisek of Poland third in 5.76m.

The perfect temperatures and favourable wind on the back straight resulted in a brilliant long jump and an historic victory. The 19-year-old Cuban, Juan Miguel Echevarria jumped 8.50m in the fourth round – just 8 cm from the stadium record – then in the last round flew an incredible 8.83m! Unfortunately the wind gauge showed +2.1 m/s, that’s 0.1 too much to be a valid result. Just four men in history have recorded longer legal jumps - Mike Powell, 8.95, Bob Beamon, 8.90, and Robert Emmiyan, 8.86m

I wanted to jump over 8.50m today but I didn’t think I’d jump that far. Nine metres is not a distance I’d even considered but now I just need to keep going and work hard to reach that dream distance, said Echevarria.

In the women’s high jump Mariya Lasitseken won on countback after clearing 2.00m, the same height as second place Mirala Demireva. Of the three Swedish girls, the best result came from Erika Kinsey who finished third with a 1.94m jump.

In the men’s 1000m, Swedish hope Andreas Kramer was the only one to follow the pacemaker and there was a 6-7m gap to the pack when he stepped off the track. Andreas continued to lead but was caught with half a lap to go and finished ninth in 2:18.30 – just off Johan Rogersted’s two year old Swedish record.