Mouth-watering head-to-heads the motivation for Kendricks and Manyonga 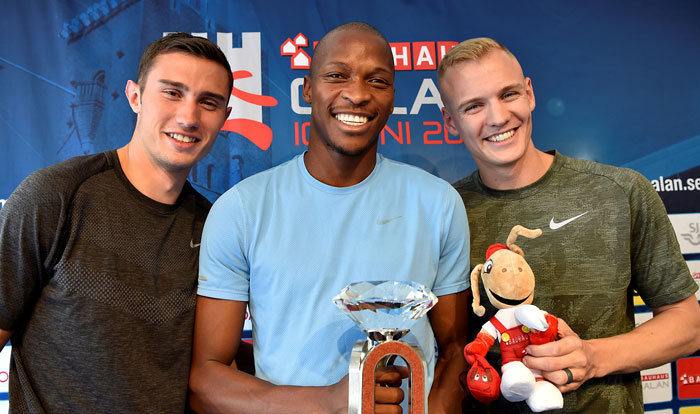 Kendricks of the USA - the global champion indoors and out - was unbeaten in 2017 and has recently notched up IAAF Diamond League victories in Rome and Eugene - in addition to winning in Germany just last night.

The 25-year-old Olympic bronze medalist enters the competition with a 5.84m season’s best courtesy of his time in the Italian capital, and Kendricks admitted he chose to leave the competition at 5.70m yesterday evening in order to save energy for the mouth-watering battle against Swedish superstar, Armand ‘Mondo’ Duplantis - the 18-year-old who jumped a 5.93m world junior record last month.

“I’ve been here for only an hour but it’s beautiful and sunny, it could have been avoided but I’m searching for competitions - I’ve competed nine times in the last month but it gives me a chance to earn a living and explore more places,” he explained.

“There’s a fire of competition often not seen in young competitors but Mondo has seen what it takes and he has a great coach. When I compete against him, i feel like he’s gunning for me and I really respect that.

“This year is a chance to go beyond - I’ve been on the road for three weeks going for wins, heights and records. My saving is ‘to go wherever the leader takes the day’ so it’s great to take the chance this year to travel around.

“The crowd will be cheering for a great competition so i don’t feel like I’m the underdog here - track and field is a gentleman’s game as we don’t get much coverage, so my enemy’s not Mondo, it’s the bar and how much better I can be. It’s about how we work together to jump the highest bar and combine our generation in one competition.”

South Africa’s Manyonga, meanwhile, leapt an impressive 8.58m world-leading mark in Rome, having already taken the Commonwealth title in April and wins in Shanghai and Hengelo.

“I’m having a good season and I’m excited about it - it feels like it’s still only the beginning of the season. Juan (Miguel Echevarria) is giving me a tough time at the moment - last year I was all alone but now it is an intense competition between us. The meeting record is at risk tomorrow, the way we’re pushing each other, we have a good shot to take it away - we need to take it for the next generation, it’s going.

“This year, I still have the African Championships and the IAAF Continental Cup so the focus is to stay healthy, perform and to break my personal best. I’m not rushing myself, it will come naturally - I just have to be patient.

“After the Commonwealth Games, I took a little break for two weeks but still trained - winning that title was on my bucket list of things I wanted to achieve. Then my world lead was taken so I had to pull my socks up and get back out there to maintain my unbeaten streak - now, I only focus on myself as it’s only me on the runway. Juan gave me a fight - I don’t like to be left behind, I feed off intense competition and I’m able to respond and change the game.

“It’s been a long time since we have two jumpers going over 8.50m so we’re helping the event to grow and it’s exciting.”

A third jumper, Thobias Nilsson Montler - Sweden’s 22-year-old European under-23 long jump bronze medalist also spoke and will be aiming to leap beyond eight-meters on Sunday:

“I started with a new coach in January after leaving college in America I hope to jump 8-meters tomorrow, my personal best is 8.04m so I@m aiming for something around that.”

The men’s 200m contest, meanwhile, will showcase a thrilling battle between the world leader and the world champion, with Steven Gardiner of the Bahamas going up against Turkey’s Ramil Guliyev in the half-lap event.

World silver medalist, Gardiner scorched to a swift 19.75 national record in Florida back in April - the first sub-20-second clocking of his career - before switching to his specialist 400m event with fine victories in the Doha and Shanghai IAAF Diamond League meetings.

His 43.87 winning time in the Qatari capital was also a Bahamian record and for now, Gardiner is happy to share his time between the two track disciplines:

“I’m happy I’m getting the chance to compete in my first ever IAAF Diamond League 200m tomorrow after dropping down from the 400m,” he revealed.

“ I just want to have fun out there - the competitors are good and once it’s sunny, then anything is possible.

“The plan is to get faster this year in order to improve the 400m. I’m keeping both distances in mind by keep working on both.”

London 2017 winner, Guliyev meanwhile, placed third in Doha before taking the honours in the Oslo IAAF Diamond League on Thursday in a 19.90 season’s best.

The 28-year-old European 200m silver medalist and Olympic finalist was close to his 19.88 lifetime best dating back to 2015 so he spoke in confident mood ahead of the tantilising head-to-head:

“I competed two days ago and the competition went great, I think my form is coming,” he explained.

“I hope I can do something really special here and I just want to enjoy the race. If the weather is good, then it’s possible to do a new Meeting Record (19.90 or better).”

Having finished sixth and eighth over 100m in the Shanghai and Rome events, respectively, Guliyev continued:

“I want a good competition in the European Championships (in Berlin in August) and my plan this year is to run a European record. I want to compete in the 100m and 200m in Berlin so I’ll see what I can do.

“(After winning the world title), I now feel like an important person and it is good to get more chances to run fast by being invited to better competitions.”

The 25-year-old Swede and world silver medalist boasts a 68.03m season’s best from California in April, and he recently finished fourth in Rome and third in Oslo, respectively.

“I felt powerful in Oslo, not good technically, though but I’m getting there,” Stahl reflected.

“It will be a good crowd full of great people tomorrow - this is my home-town where I was born and grew up. My track and field club and my football team is here, and all of my family and friends will be coming here to scream. I feel really good and confident - I will try my best tomorrow to hopefully win.”

His challenger, 27-year-old Mason Finley of the USA is the world bronze medalist who placed fifth in Oslo with a 65.16m season’s best a week after finishing sixth in Rome. Finley has hopes to improve upon his top 2018 IAAF Diamond League position in Stockholm:

“It’s a beautiful stadium so I can’t wait to compete here - hopefully, there will be some big throws, I want to throw really far - as far as I can, definitely over 65m and get into the top three,” he revealed.

“We have great competitors here so I’m very excited to compete with them - it’s a great start-list that mimicks the World Championship so it’s the best competition in the world tomorrow.”

On the impact his unexpected global bronze medal has on young American throwers and in response to his changing physique, Finley continued:

“I really hope seeing an American getting a global medal inspires the next generation and breathes life into the discus.

“I lost over 100 pounds over the course of three years - I got too heavy so I’ve had to adapt my training and nutrition to get to the optimal weight for competition.”

Another Swedish thrower, Simon Pettersson will looking to make an impact on home turf - the 24-year-old world finalist recorded a 65.81m personal best in March and he is relishing the step up in competition on Sunday:

“I think this will be the biggest competition of my career outside of the world championships, so I want to do my best tomorrow,” he explained.

“I really hit a good one in the world’s so I hope for similar this year - I want to become more consistent, it’s coming along so I hope to do well in the European’s. It will be really fun tomorrow so we’re in for a good night.”