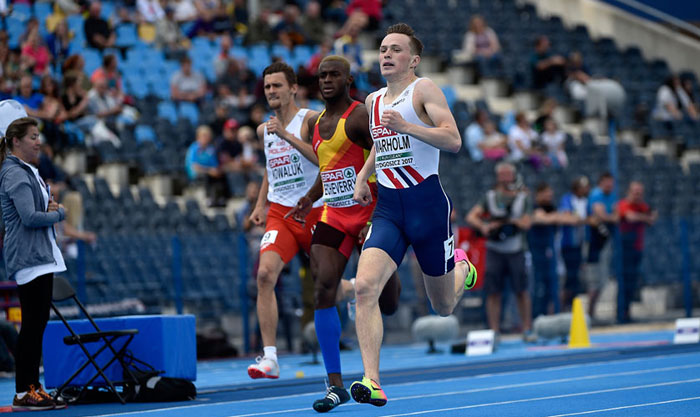 It is 17 May, Norway’s national day and Stadionklubbarna, the organisers of BAUHAUS-galan, are proud to be able to present Norway’s biggest athletics star. The world 400m hurdles champion, Karsten Warholm, is coming to the Stockholm Diamond League meeting on 10 July. Photo: Deca Text&Bild

Twenty two year-old Karsten Warholm made a huge break through last year and he became one of the youngest world champions over 400m hurdles shocking every one in the final by leading from start to finish. He opened his Diamond League season in June with two victories – first at home in Oslo in a Norwegian record of 48.25. He then took the train to Stockholm and three days later beat an elite field at BAUHAUS-galan. He’s now looking for another triumph.

– I really hope a lot of people come to Stockholm Olympic Stadium on 10 June because I believe they will see a super fast race.
Amongst other international elite he will face this year’s revelation, Abderrahmane Samba from Qatar, who outclassed the field at the Diamond League premiere at his home track in Doha, with a brilliant 47.57 – the best time in the world for eight years.

An all-round phonomenon
Karsten Warholm is a decathlete who became a hurdler and he is also a world-class 400m flat runner. He won gold in the octathlon at the World Youth Championships as a 17-year-old. At the European Junior Championships in Eskilstuna in 2015 he competed in the decathlon and 400m where he took a silver medal in the final right in the middle of his decathlon! Just an hour and a half after the silver, he ran another 400m race, this time in the decathlon, and was just two seconds slower (46.50 followed by 48.72). The result was silver in the decathlon too and a demonstration of what a tough guy Karsten can be.

In 2016 he focussed seriously on 400m hurdles, came 6th in the European Championships and almost made the Olympic final after running a Norwegian record of 48.49 in his heat. Since then, the 400m hurdles has become his main event and the world title in 2017 and two Diamond League victories meant that he was ranked world number one in 400m hurdles by Track&Field News. Karsten’s Norwegian record is 48.22 and, if conditions are right, with the crowd’s support, he can run even faster at BAUHAUS-galan on 10 July.