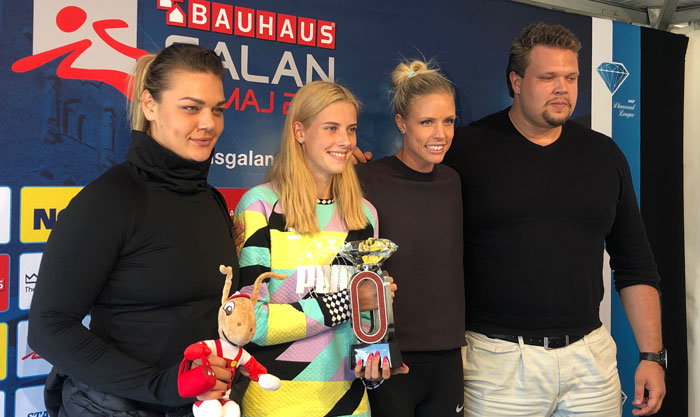 On the eve of the tenth anniversary edition of the IAAF Diamond League meeting in Stockholm, a discus-throwing duo and a pair of high jumpers kicked off the official pre-event press conferences.

Ståhl aiming to pick up where he left off

One of the men of the moment in Stockholm is local star Daniel Ståhl, following his impressive 70.56m winning throw in the Doha IAAF Diamond League recently.

The 26-year-old world silver medalist discussed of his fine form and plan for tomorrow:

“Doha was fantastic, the training has been going well so all is going good,” said Ståhl modestly.

“I’ve thrown 73-meters in training and my plan is to throw far here then focus on the IAAF World Championships (in Doha in September).

With a lifetime best of 71.29m, the European silver medalist continued:

“All of my friends are coming tomorrow so it’s going to be great.

“I’ve been training a lot, working on my technique. I’m going to compete until July then take a week off and get back to competing again at the Swedish Championships, then I will head to the pre-camp in Rome for Doha.”

Tomorrow evening, Stahl will face Norway’s Ola Stunes Isene, who has improved his best by almost four and a half meters this season to 67.78m and Iran’s 2012 Olympic silver medalist, Ehsan Hadadi who placed third in Doha.

Making her eagerly-anticipated return to competition since September, Croatia’s two-time Olympic and two-time world champion, Sandra Perkovic explained her aims for her 2019 campaign:

“It’s always nice to be back in Stockholm - the weather and the crowd is always good so I always enjoy it.

“I hope there will be no rain as the circle will be slippery - I’m starting my season late and I think I will be the good one in Doha. I won’t have a break as had a three-month break after my best season last summer and I will compete a lot on the IAAF Diamond League circuit this summer.”

The 28-year-old six-time IAAF Diamond League title winner (between the 2012 and 2017 seasons) is determined to maintain her world number one status, which she has firmly held onto for the past three years:

“I want to defend my (Olympic) title in Tokyo - I really love my job and I’m healthy so I’m enjoying every moment in the circle, nothing can compare with that.”

With a huge 71.41m personal best from 2017, the five-time European champion revealed her past work in the Croatian Parliament in 2015:

“You can do a lot of stuff in your life, I give my best in athletics and my accomplishments. I work hard and never give up - the young people who have something to say should be in politics as well. I want to focus on Tokyo now but I managed to work as well as train and compete, it wasn’t easy,” she recalled.

Perkovic’s nearest challenger is likely to be Cuba’s 2015 world champion, Denia Caballero, who has a 68.46m season’s best.

Yaroslava Mahuchikh, the 17-year-old breakout star of the early season, enjoyed her first press conference albeit in a shy, modest manner.

The Ukrainian world youth champion - who leapt a 1.96m personal best and world junior lead for a surprise victory in Doha - reminicsed about her earlier fine performances:

“Doha was my first outdoor competition of the season and it very good - the support was great and I was very happy to jump 1.96m,” she said.

“It was a surprise as it was an early start to my year. Last year was a perfect year but it was so hard - to win the youth Olympic Games, it has given me good memories and it was the first step for (the Olympic Games in) Tokyo - I want to thank my coach for supporting me.”

Having cleared 1.99m for a European junior record during the indoor season, Mahuchikh explained her thoughts on competing against the world’s best in the senior ranks:

“It’s better to compete with the good girls - they’re friendly and it’s good experience for me. I expect a good result but I have no targets.

“I’m very excited as this is my first press conference and I just want to jump my personal best in Doha, that is my only goal.”

Home hope, Erika Kinsey - who finished one place behind Mahuchikh in Doha with 1.91m - also spoke and the 31-year-old Swede revealed her plan to compete in both the high jump and long jump at the global championships in September:

“The long jump’s been helping me a lot with the extra training and to have another focus helps me to be more relaxed in the high jump. If I qualify for both, I will do both as the timetable works for it,” she said.

Having registered a 1.94m season’s best recently, the European indoor seventh placer detailed her delight to compete in the Swedish capital:

“Last year was awesome here - the crowd was great and I enjoy being here. It’s always special to compete in front of a home crowd so I’m excited,” she said.