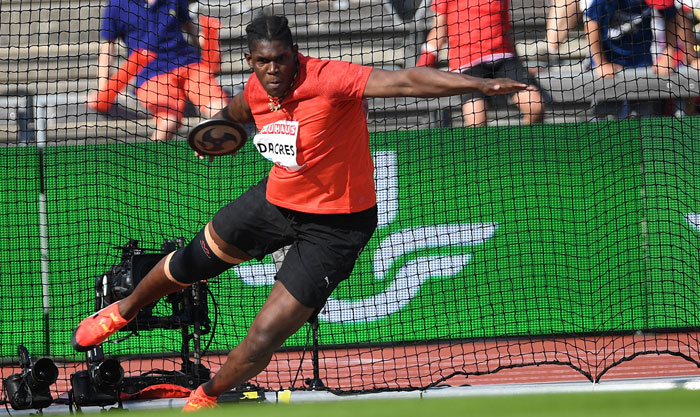 Ahead of Stockholm’s IAAF Diamond League spectacular on Thursday (May 30th), we take a look back on the rich history of athletic excellence achieved in the Swedish capitals’ stadium, by reviewing some of the finest stadium records recorded in the grand arena over the past half a century.

The scene of the 1912 Olympic Games, the impressive ‘castle stadium’ has witnessed an incredible 83 world records - the most by any other athletics venue in the world by far and now, as it prepares to stage the tenth edition of the annual IAAF Diamond League, we highlight a cluster of top performances from the most famous faces to grace its’ track and in-field.

The eight-time world sprint champion sped to victory on the eve of his first of three Olympic titles. Johnson achieved the 200m-400m double in the Atlanta, 1996 Games shortly after his Stockholm appearance.

The 2004 Olympic champion top the top honours ahead of taking his second global one-lap victory in Osaka.

This world record attempt impressed the world shortly before Kipketer went onto claim his second of three world titles in Athens.

The three-time Olympic champion recorded this fine victory shortly ahead of capturing the world 10,000m crown in Athens - his 13th of a remarkable 17 global victories.

Robles’ speedy run over the barriers was a fine dress rehearsal before his Olympic win in the Athens Games.

This superb one-lap hurdles performance provided confirmation of Samba’s break-out season, and he is now the favourite for world glory in Doha this summer.

The only Swedish athlete on the Stockholm stadium record list, Sjoberg’s mammoth leap was a world record at the time and it arrived following his second of four world indoor titles and just before his World Championship victory in Rome.

Later to be crowned the 2000 Olympic champion, Pedroso’s outstanding jump arrived in the wake of his third of five world indoor crowns, and before his second of four world titles - in Athens the following month.

This throw was enough to rank Dacres as second on the global ranking last year.

The two-time Olympic champion launched the spear here before taking the first of two European wins.

A global gold medalist from 60m indoors in 1991 to Olympic glory over 400m hurdles in Sydney, 2000 - and with 200m and 400m success in between - this blistering time has survived many attacks from a host of big-name stars over the past two decades.

The latter stadium record arrived after her second of seven world indoor titles for the 2000 Olympic champion and three-time world outdoor champion.

The two-time Olympic champion and two-time world outdoor champion’s shorter stadium record followed her second of four world indoor crowns, whilst her longer stadium record came ahead of a silver medal performance in the Beijing Olympics.

The 2016 Olympic champion and 2013 world champion’s mark placed her in the second spot on the 2018 world rankings.

This achievement prepared the 2012 Olympic bronze medalist to take her first of two world titles in Moscow the following month.

The two-time world indoor champion warmed up for her first of two world outdoor victories - in Osaka - with this fine clearance.

The two-time Olympic champion and four-time world indoor champion launched the put to this impressive distance before claiming her four world outdoor crown in Moscow.

Unquestionably, Stockholm appears to be the place to use as a springboard to success at the annual pinnacle of the season, so the big question remains...who will cement their place on the stadium’s roll of honour this week en route to September’s IAAF World Championships in Doha?