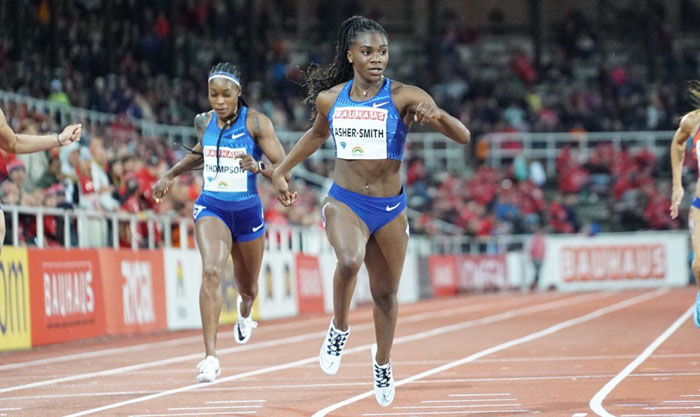 Stockholm celebrated its tenth anniversary in the IAAF Diamond League calendar with two world-leading performances and a cluster of top-class achievements on the track and in-field. Photo of 200m winner Dina Asher Smith by Diamond League

In cool and windy conditions, the Swedish capital welcomed the third leg of the global athletics series as a the world elite graced the 1912 Olympic stadium.

Triple European sprint champion, Dina Asher-Smith added the 200m victory to her 2018 win over 100m in Stockholm, with a scorching 22.18 world-leading performance.

The 23-year-old Briton followed up her impressive 22.26 victory in the IAAF Doha Diamond League earlier this month to dominate a top field which saw Jamaica’s double Olympic champion, Elaine Thompson clock 22.66 for second place and two-time world champion, Dafne Schippers of the Netherlands register a 22.78 season’s best for third position.

“I am very happy with that - my aim was to come and win and run my own race, which is very important in a race of that calibre. I didn’t expect to run that kind of time as it is quite cold out and late at night. Next week is the IAAF Rome Diamond League then I will be back to solid training.”

“I’m really happy I have done well, it was a strong race - I didn’t know if I could win but I did enough for the victory! Now, I will go back to Kenya to train and as well as the world champs, I now have the opportunity to compete for the diamond!”

Kenya’s Rhonex Kipruto smashed his lifetime best by 31-seconds to scorch to a 26:50.16 world-lead in the 10,000m non-Diamond League event, which brought the meeting to a close in thrilling fashion.

The 19-year-old world junior champion - who finished sixth in the IAAF World cross country Championships in March - strode home 11 seconds ahead of Ethiopia’s Olympic 5,000m bronze medalist, Hagos Gebriwhet who made a fine 25 lap debut with 27:01.02 in second position.

“I am very happy! A new world-leading time, under 27-minutes! Now I am going back to Kenya - some more training there until I run another IAAF Diamond League, maybe 5,000m. Later in the year, I’ll run 10,000m at the world champs.”

The win but no record for Norman

The unfavourable conditions put paid to Michael Norman’s unofficial attack on the 400m world record - or at the very least - IAAF Diamond League record, but the 21-year-old American still strode away to a comfortable 44.53 victory.

In the wake of his blistering 43.45 lifetime best last month to go to fourth on the world all-time list, Norman finished seven tenths of a second ahead of his training partner, Rai Benjamin who clocked 45.13 in second place.

“Today was challenging both mentally and physically - and there’s a lot of things I need to work on. I’m not particularly satisfied with my race. I need to work on the second part of the race still and I’ll re-adjust and re-evaluate as I go.

“It’s a long way to go until the world champs just yet. I’ll continue working hard with my coach and we’ll see where that gets me.”

Local man, Thobias Montler gave the crowd a thrilling display of consistency as the 23-year-old smashed his lifetime best on no less than three occasions to leap to a surprise long jump victory.

The European indoor silver medalist flew to 8.22m in the second round - in addition to 8.14m in the third and 8.13m in the fifth to improve his 8.10m 2018 best and upset a stellar field in the process.

“It was pretty cold but a fantastic competition for me with a 8.22m PB and it is also the standard for the Olympics so I am super happy. Of course I am surprised to come out on top of the big names but maybe I am more used to the cold!”

In his wake, world indoor champion, Juan Miguel Echevarria of Cuba - who last year flew to a mighty 8.83m victory - had to settle for the runner-up position with only a best of  8.12m, as the USA’s Olympic champion, Jeff Henderson finished third with 8.09m and world outdoor champion, Luvo Manyonga of South Africa placed fourth with 8.07m.

Competing for the first time since she claimed her third European title back in March in Glasgow, two-time world indoor and two-time world outdoor champion, Mariya Lasitskene took the high jump honours with a 1.92m clearance.

The 26-year-old Authorised Neutral Athlete then attempted 1.97m on three occasions but her best was enough to better Ukraine’s world silver medalist, Yuliya Levchenko and Sweden’s Erika Kinsey, who took the second and third spot, respectively with 1.90m.

“Today, it was super hard for me - my body was not listening at all to me. I tried not to get injured during the competition and therefore I am happy. Next, I will take step by step and just follow my coach.”

It was a case of history repeating itself for Sam Kendricks, as the American pole vaulter took the spoils again following his 2018 victory.

Comfortable and popular win for Stahl

Sweden’s world silver medalist, Daniel Stahl launched the discus to 69.57m in second round to secure a popular win.

The 26-year-old - who registered 70.56m to take the honours in Doha - made the most of the tricky conditions to keep 2018 winner, Fedrick Dacres behind in second spot - the Jamaican throwing 68.96m for a season’s best.

Stahl said afterwards: “I threw a little bit too high today, that’s why I didn’t throw longer but it’s there, it’ll come. I felt like I had 60% power in my winning throw so there’s a lot more to give.

“It was a decent throw, though and it’s good for my confidence. I’ve trained the who;le winter and spring on my technique so it’s going to be fun in the future.”

Cheruiyot back to winning ways

Kenya’s world silver medalist, Timothy Cheruiyot won no less than seven races on the IAAF Diamond League circuit last season and the 23-year-old Kenyan has begun to reassert his authority over the metric mile again, with an impressive victory here in 3:35.79.

Cheruiyot revealed: “I’m happy with today because I won - it was cold but I tried my best. It was quick, almost 1:52 at 800m - that’s fast. I need to prepare well for the world championships, we will see how it goes.”

In his first race since storming to a superb 45.05 European indoor 400m record en route to claiming the continental title in Glasgow back in March, Karsten Warholm stormed clear of the 400m hurdles field to clock a fine 47.85 victory.

The 23-year-old world champion from Norway took the win by a second and a half, and said afterwards:

“I am very good and of course, I took it out fast - I was very happy with the race. I managed to take 13 steps until hurdle nine, which is really good in these conditions so maybe this is the year I will go 13 all the way.

“I won in the cold and rain in London (in 2017) so In have to learn to run in all conditions. Next up is Oslo and I am really looking forward to the big home crowd.”

The USA’s world record holder, Kendra Harrison stole the show in the 100m hurdles with a 12.52 victory over her compatriot, Sharika Nelvis.

“I just had to come out, focus on my lane and get the job done, which I did. I felt pretty good, I didn’t get out as well as I wanted but I finished the way that I wanted so I plan on putting the whole race together by the time the (world champs USA) trials come round.”

Victory for Caballero as Perkovic falters

Olympic bronze medalist, Denia Caballero of Cuba took the discus honours with a 65.10m effort in the second round to pip her compatriot, Yaime Perez - the world fourth placer - who registered 65.09m in the fourth round.

Returning to competition for the first time since September with a best of 63.71m, it was the first time in nine years that the 2016, 2017 and 2018 world leader has finished outside of the top three in competition,

In the non-Diamond League 1500m, Britain’s five-time European champion, Laura Muir made her highly-anticipated summer track debut and dominated the field to win by more than four seconds with 4:05.37.

“I feel very happy with that - it is much more representative of where I’m at. Today was about the win rather than the time with the conditions as they are. I am happy that I executed the race well and got the win.”

Home hope, Wictor Petersson caused a surprise in the shot put by taking the win with a 20.11m effort in the third round, in unfavourable conditions outside the Kungl Musikhogskolan building adjacent to the stadium.

The 21-year-old - who has already registered a fine 20.70m personal best this season, improving his lifetime best by over a meter, enjoyed a strong series with 20.10m in the fourth round and subsequently enjoyed all six throws over the 19.30m mark.

Dominance from Wilson in 800m

The USA’s two-time world indoor silver medalist, Ajee Wilson was an easy winner of the 800m.

The 25-year-old, who finished third in the Doha IAAF Diamond League, crossed the line in in 2:00.87.

European bronze medallist, Aliona Dubitskaya followed up her third position in the Shanghai IAAF Diamond League recently with a strong shot put win, courtesy of her 18.49m best in the second round.

The 29-year-old from Belarus took the top spot from Sweden’s Fanny Roos, who reached 18.36m ahead of Canada’s Brittan Crew (18.28m) in third place.

The 25-year-old 4.73m vaulter took three chances at 4.75m before bowing out to the cheers of her home crowd.