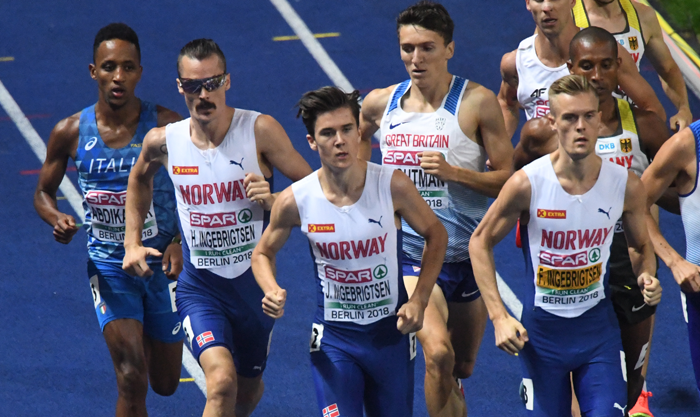 Jakob Ingebrigtsen, 18, claimed double gold at the European Championships in Berlin last summer and followed up with gold and silver at the European Indoor Championships in Glasgow in March. Older brothers Henrik and Filip, who have also won European 1500m gold, are accompanying him to Stockholm’s Diamond League meeting. Local interest will be supplied by Sweden’s number one, Kalle Berglund.

Jakob is one of the all-time greatest running talents, who, last summer, at the age of 17 years and 10 months, became the youngest ever male European champion, when he won the 1500m at Berlin’s Olympic Stadium. The following day he claimed gold in the 5000m, a race which saw brother, Henrik, take the silver medal.
– Fantastic that we’ve got all three Ingebrigtsen brothers in the same race! exclaimed an overjoyed Jan Kowalski, chairman for Stadionklubbarna, which organises the Diamond League meeting.

Expect fast times
The 1500m race for the Dickson Trophy, at Stockholm Olympic Stadium on 30 May also includes Kalle Berglund from local club Spårvägens FK who improved his own Swedish indoor 1500m record to 3:36.63 this winter. Last summer he was twice less than two tenths of a second away from breaking the 33 year old Swedish outdoor record of 3:36.49, set by Johnny Kroon in 1985.
Also on the start line will be the reigning world champion, Elijah Manangoi, with a personal best of 3:28.80. And he’s bringing his little brother, George, reigning world junior champion and one of the few to have beaten Jakob Ingebrigtsen.
/Jonas Hedman

Buy your tickets for BAUHAUS-galan, Thursday 30 May!