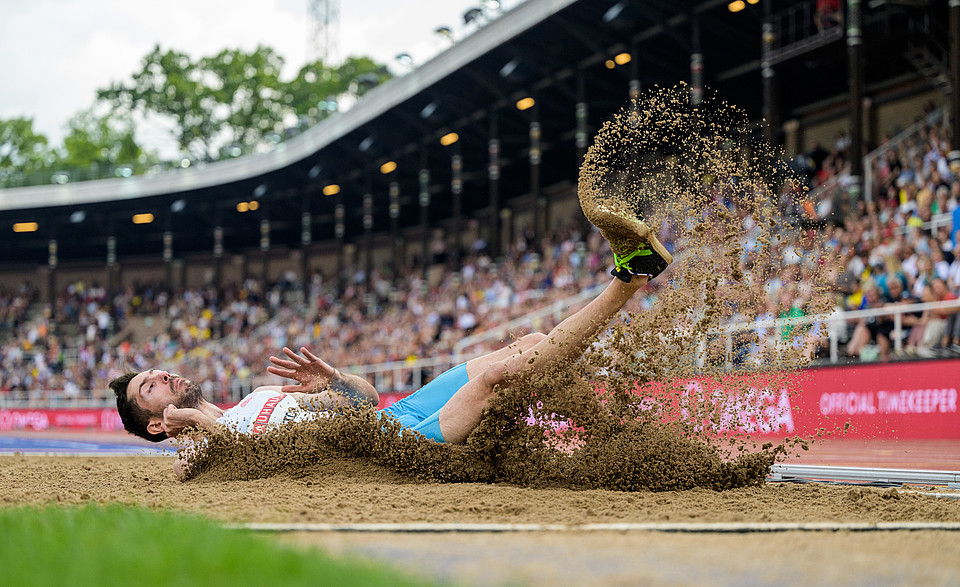 Olympic, world indoor and European indoor and outdoor champion, Miltiadis Tentoglou leapt a superb 8.31m (+1.7) to take glory in the long jump and spoil the Swedish party with home star, Thobias Montler having to settle for the runner-up position with a 7.98m (+1) best effort.

Greece’s Tentoglou, 24 - who won in Rabat and Oslo recently - jumped 8.12m (+0.9) in the final round after enjoying his finest jump in the fifth, whilst Sweden’s Montler - the 26-year-old world indoor silver medalist and Olympic seventh placer - registered his best in round two amongst a highly consistent series which boasted five jumps above 7.79m.

“I am very pleased with what I did but we started really bad to be honest,” Tentoglou explained. “The wind was crazy - it  was changing all the time - minus 2, plus 2…

“I was here alone - my coach was not with me so it also did not help me with my self-confidence. I had to find my run up but it was OK in the end. I pushed my run up 30cm back and told myself that it was going to be OK. But still, I think it could be further. I want to fight for the gold in Eugene.”

Great Britain’s Lorraine Ugen claimed her first Diamond League win of the season with a 6.81m season’s best in a highly-competitive long jump event, which saw no less than five women surpass the 6.70m barrier.

“I did leave it late today with my fifth jump but that tends to be my way,” commented Ugen.

“I do best as I build the pressure on myself as the competition builds, I need to know it is now or never almost.

“I am going to get some good training in now before the World’s and I really think I can get on the podium there. It is great to be going off the back of this win, I am building nicely on my indoor success and I feel I can do well in Oregon. After that, I have the Commonwealth’s so it is a busy year. I have not decided about the European’s as three championships is a lot in one season.”

Ealey and Patterson impress in shot and high jump battles

The 27-year-old American - who was victorious in the Doha, Shanghai and Oslo Diamond League events earlier this season - welcomed her best throw in the sixth and final round to comfortably win ahead of Canada’s Sarah Mitton (19.90m).

“I feel really amazing as I had two good throws today,” Ealey later explained.  “I felt very confident and comfortable in the circle.

“I feel like my final three throws were good like all my Diamond league meets I have had so far this year. I want to get a medal, preferably gold when I get to the World Championships. I do not really have any rivals in here, we are all friends. I just want to keep throwing and keep loving it.

“I always said ‘look good, throw good’. To put all this make-up, it's just a part of my routine. It makes me feel better and it really represents me.”

Patterson, 26 - the Olympic fifth placer - reached her best height on the second attempt and said afterwards:

“It was not my best preparation for today with a bit of a niggle picked up in the warm up at a previous Diamond League event, so I have started my season late, so to come away with the win on my season opener is great especially given I made it difficult for myself by taking three jumps to clear 1.93m.

“I really wanted to get a competition under my belt and what better place than Stockholm - I love it here. I fly to America now for a training base in Seattle with the Australian team to acclimatise.

“As Australians, we are away from home for a long time during the year which is why I decided to make a later start to my season. I can fly there with confidence now after this evening. After Oregon (Eugene, World Championships), I have the Commonwealth Games which I love as that was my first international competition.”