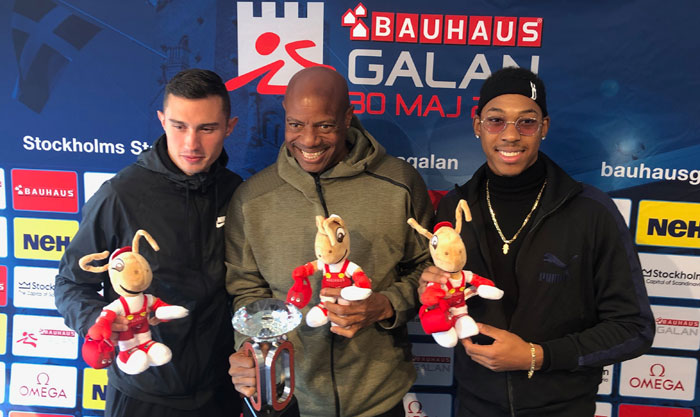 Echevarria, the world indoor champion and 2018 world number one, returns to Stockholm for tomorrow’s Diamond League meeting full of confidence after a windy 8.92m jump in March this year.

“Last year, [during the Diamond League meeting], my facebook started going wild after the massive jump from Echevarria.  I knew immediately that this kid’s the real deal.  It reminds me of back in 1995 when Pedroso was jumping well.

“I am sure he will get my record sometime.  There have been jumpers before who have been capable of breaking my record and now Echevarria is definitely one of these.

“At the same time I like being the world record holder and I have got used to it but it has been 27 years and so I am thankful and I never thought people would be still talking about me and listening to me!

“During the years, there were jumpers capable of breaking my record.  The advantage I had was I was competing against Carl Lewis and others so I had to jump far to win.   His [Echevarria] technique is great and he is a good guy and he is taller – he is tall, he is fast and he can jump.  He can go for it!”

Echevarria was delighted to hear praise for him from Powell and said:

“It is an honour to hear from the world record holder that I am capable but it does depend on conditions.  At the moment I am happy to just be winning.

“I was feeling very good in Cuba when I jumped earlier this year but the wind was too high.”

The crowd can help

On how the crowd can help jumpers in particular, Powell said “We jumped for the ooo’s and ahhh’s from the crowd.  We loved to hear the crowd.  I am such a fan for the long jump and I am really happy that attention has turned to the long jump after so many years of concentrating on the sprints.”

Sweden’s Tobias Montler who took the silver medal at the European Indoors earlier this year said  “I am not really an entertainer but I can use the energy from the crowd to help me jump far.  I love the crowd to clap for me. I think Echevarria is a huge entertainer and his jumping can get the crowd to focus on the long jump which is a big help.”

Echevarria added  “I enjoy it best when the people are enjoying the competition and I am always a very happy person.  I like to give to the people what they want.

On tomorrow’s competition he commented “I never look at the other athletes during competition.  I just focus on my distance and myself but other great athletes of course can help to push me to jump further.”

Montler agreed: “I am very much looking forward to competing tomorrow with the big local support.  The competition is really good with an excellent field with Echevarria and of course also Luvo Manyonga and Jeff Henderson.”

Asked about the improvements made to the sandpit, Echevarria said, “Thank you so much for extending the sandpit.  I have seen the changes on social media and I am looking forward to jumping tomorrow.”

On his preparation for tomorrow, Echevarria added “There have been no big changes, just maintenance and some more focus on discipline and my psychology to ensure I have some fun.

“I feel no pressure on breaking the world record – it will come when I have perfect conditions and the competition is right.”

The biggest threat for Echevarria will come from USA’s Jeff Henderson and South African Luvo Manyonga.  Henderson, the Olympic gold medallist has already jumped 8.38m (at altitude) this season and will be looking to build on this in his first Diamond League of the season.

Meanwhile Manyonga is currently the world number one and will be hoping to improve his 8.35m jump last month in South Africa.