Ones to Watch: Field Eventers Ready to Shine 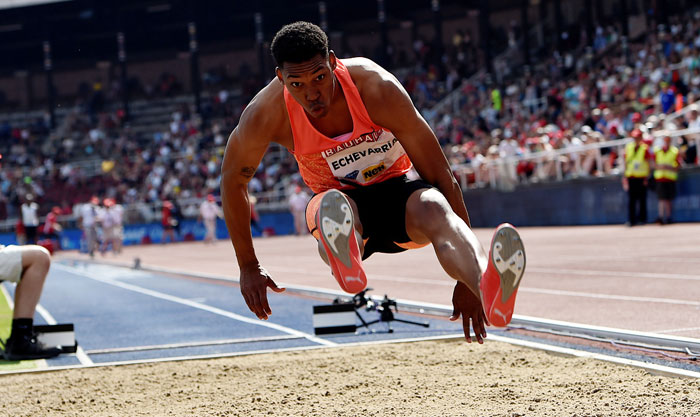 With the tenth anniversary edition of the IAAF Diamond League meeting only days away (on Thursday, May 30th), we take a look at the expected field eventers poised to impress in Stockholm... (Photo of Juan Miguel Echevarria by Deca Text&Bild.)

The top three men from an epic battle in the sandpit last summer all return to Stockholm’s ‘castle stadium’ this week, in what promises to be a mouthwatering duel.

World indoor champion, Juan Miguel Echevarria of Cuba flew to a mighty 8.83m victory last year in only marginal advantageous wind, and the 20-year-old star arrives off the back of a fine 8.92m windy effort in March.

The 2018 world number one will be looking to improve his 8.68m lifetime best but the top spot will be hard fought with both the Olympic and world outdoor champions additionally vying for prime position.

The USA’s Jeff Henderson has a 8.38m best from altitude this season, whilst the Olympic silver medalist behind him - Luvo Manyonga of South Africa - enters the competition with 8.35m to his name this campaign.

While the result and distances as yet unknown, what is for certain is that this talented trio are definitely ready to let off some fireworks in what will be a thrilling contest.

Another athlete arriving in Stockholm in impeccable form is Sweden’s very own Daniel Ståhl.

The 26-year-old world silver medalist launched the discus to 70.56m to win the Doha IAAF Diamond League recently and the pressure is on for him to deliver once more.

Hot on his heels, however, will be three men eager to take the discus mantle - Norway’s 24-year-old, Ola Stunes Isene has improved his best by almost four and a half meters this season to 67.78m, whilst Iran’s 2012 Olympic silver medalist, Ehsan Hadadi placed third in Doha.

Another to keep the eye on should be Fedrick Dacres. The Jamaican  threw a 69.67m national record to take the top spot in Stockholm last summer and he will be hoping to create more happy memories in the Swedish capital.

Sam Kendricks is another 2018 victor hoping to repeat his winning performance from twelve months ago.

The 26-year-old American leapt 5.80m to take the win in Doha and the world champion looks hard to beat.

His main challenger will likely come in the form of Brazil’s Olympic champion, Thiago Braz who finished runner-up in the Qatari capital, whilst Germany’s 2013 world champion, Raphael Holzdeppe makes his seasonal debut.

Women’s high jump - Back to winning ways for Lasitskene?

Competing for the first time since she claimed her third European title back in March in Glasgow, two-time world indoor and two-time world outdoor champion, Mariya Lasitskene is the top attraction in the women’s high jump field.

The 26-year-old Authorised Neutral Athlete - who has a superb 2.06m lifetime best - faces 17-year-old breakout star, Yaroslava Mahuchikh who leapt a 1.96m personal best for a surprise victory in Doha.

The Ukrainian world youth champion is also joined by home hope, Erika Kinsey who finished one place behind her in Doha.

Another athlete set to return from a long absence is Croatia’s two-time Olympic and two-time world champion, Sandra Perkovic.

The 28-year-old last competed in September and she will be determined to maintain her world number one status, which she has firmly held onto for the past three years.

With a huge 71.41m personal best, the five-time European champion will face Cuba’s 2015 world champion, Denia Caballero, who has a 68.46m season’s best.

The USA’s 2015 world champion, Joe Kovacs starts as the favourite as the 29-year-old holds a 20.83m season’s best but Sweden’s 21-year-old, Wictor Petersson could cause a stir, following his 20.70m personal best this season - an improvement by over a meter.

Third in the Shanghai IAAF Diamond League recently, Aliona Dubitskaya should feature prominently in the women’s shot, though the field appears comparatively open.

The 29-year-old European bronze medallist from Belarus has a 18.78m season’s best but she will be challenged by Canada’s Brittany Crew, who has 18.46m to her name in 2019.

Women’s pole vault - Bengtsson for the win with home support?

Home girl, Angelica Bengtsson - the three-time European bronze medalist - will be aiming to please the local crowd and the 4.73m vaulter stands a chance with her recent 4.45m form.

She will be up against Iryna Zhuk of Belarus - who jumped 4.52m to place sixth in Shanghai but the 25-year-old Bengtsson should be able to prosper with the support of the home crowd.